As a decorated young Marine veteran, just home from
the war, just by chance, Enedino De Leon became the
custom knife-making protege of Ralph Bone at the “Ralph
Bone Knife Company”. As a result of that tutoring and De
Leon’s talent and ingenuity, De Leon soon became one of
the most talented and highly sought out custom knife
makers that America has known to date!

Commencing in the early 1970s, it became De Leon’s
responsibility to produce the majority of the standard
production knives of the Ralph Bone Knife Company. A
few years later, he assumed total responsibility for
production and, at “De Leon Made Knives”, De Leon
became world famous for his many custom knife designs
and innovations.

“The Artistry of Ralph P Bone” provides details of De
Leon’s knife-making career and illustrates many examples
of his outstanding artistry, which spanned a period over
forty-five years, until De Leon’s untimely death in
mid-2015. 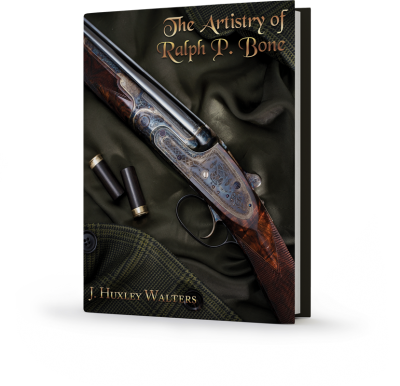 The Artistry of Ralph P. Bone

Explore the quality and progression of Bone’s multifaceted artistry. The book provides details of Bone’s life, commencing with his venturing into knife-making, as a kid, and to highlighting his multiple careers.

We believe you’ll be highly impressed with this exquisite coffee-table quality book! The book is 8.5” x 11” with 290 pages, printed on the finest 80 pound silk stock, including 324 color exhibits, detailed index and exhibit listings, all superior quality Smyth-sewn to a black faux-leather hard binder, with gold foil lettering and a colorful slip cover. The coffee-table edition of the book is ONLY AVAILABLE through this website, in a limited quantity, for immediate delivery at $119.95, plus shipping!

A standard hard-back print version of the book, on 70 pound print stock, is available on Amazon and in the big box book stores for $79.95.

As both a long-time friend and client, Walters is uniquely prepared to provide you with details and insight no others could. Learn More »